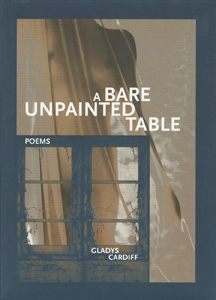 Gladys Cardiff is an enrolled member of the Eastern Band of Cherokee, and a member of the Native Writers’ Circle of the Americas. Her small book, To Frighten a Storm, from Copper Canyon Press, won the Washington State Governor’s First Book Award in 1976. These are poems from a mature and wise consciousness that understands loss, grief, and the value of the unassailable “solaces we yearn for.” One emerges from Cardiff’s intense, complex meditations with a renewed sense of both the durability of the human spirit and its potential.

“Cardiff’s words are photographs of love and the double exposures of emotion. She captures the tenor of planes, the cartographies of moon and water. Her lines are cantilevers where two worlds meet.”
—Diane Glancy

“When I first encountered the poems of Gladys Cardiff, almost two decades ago, I was struck by their power. Her first small collection of poems, To Frighten a Storm, drew its strength not only from her understanding of Cherokee culture, but also from the eloquent clarity of her language and her insight into the human heart. It was poetry that was deeply traditional and uniquely original. This long-awaited major collection demonstrates how Cardiff’s voice has grown and matured while losing none of that early energy. These literate, passionate poems of family and history, journeys of body and spirit, should find a wide and appreciative audience.”
—Joseph Bruchac

“[Gladys Cardiff] is often grasped by something seen – a Victorian postcard picture of a stereotyped Indian woman, luna moths, Giacometti’s changing use of space, two flocks of crows, a single crow; but also by situations – the final days of a couple’s pet shop, a recording of a fatal airplane crash, an elder’s courteous speech about repatriation, and someone else’s need. Usually a poem has a comfortable length of line for its purpose, unfolds, and becomes complete (there is also a pantoum). One feels in the presence of eyes that see much, of maturity not easily won.”
—The Virginia Quarterly Review

Gladys Cardiff’s poems have appeared in numerous periodicals and anthologies, including such essential gatherings of Native American poetry as Carriers of the Dream Wheel, From the Belly of the Shark, Songs from this Earth on Turtle’s Back, That’s What She Said, Harpers Anthology of 20th Century Native American Poetry, and Reinventing the Enemy‘s Language. Cardiff grew up in Seattle, Washington, and received degrees in creative writing from the University of Washington. She received her Doctorate at Western Michigan University and is a professor at Oakland University in Rochester, Michigan.