A Breathable Light by Rodney Torreson 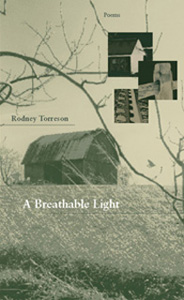 At the beginning of Rodney Torreson’s fascinating second book, everything is in its place—ordinary, time-honored, known. Then, quite without warning, the familiar becomes new, alien, strangely awful or strangely dazzling. In a landscape of ditch, fence, branch, stone, and weed, it seems all living creatures are in league with the dry wind and the icebound ruts—deer, pig, horse, cow, even the innocent, suckling lamb. In subversive ways, A Breathable Light takes the human figure out of his seat in the foreground, strips him of all privileges and asks him to understand himself as nature understands him. . . Thus, as an old gate-post settles into mud, the farmer sees his own quietly abandoned ambition; night falls and a tractor starts up of its own accord; the family dog has wool scraps in its teeth; a saddle slips and the upended rider finds himself galloping in air, “head striking the / grassy sky until [he sees] stars . . .” This is the truth about nature and human nature, and in forty-four beautifully uncluttered poems Torreson shows us the world as it’s always been—a realm of unrelenting wonder.

“Poetry is still the best way to say things both little and big, both simple and grand, and at every turn Rodney Torreson’s clear-headed, generous poems illustrate that. Deftly restrained, perfectly paced, not one word out of place—a fine book page after page.”
—Ted Kooser

“The Midwestern setting here foreshadows the world of A Breathable Light, Torreson’s new book of 44 poems. As in the poetry of fellow Midwesterners Ted Kooser and Jared Carter, in his best poems Torreson successfully evokes the vivid landscapes and emotional atmosphere of his region through precise imagery and effective metaphor.”
—Matthew Brennan, American Book Review

Rodney Torreson, after growing up in Iowa, moved with his wife Paulette to Grand Rapids, Michigan, where he teaches at Immanuel-St. James Lutheran School. In addition to A Breathable Light, he is the author of The Ripening of Pinstripes: Called Shots on the New York Yankees, published by Story Line Press.