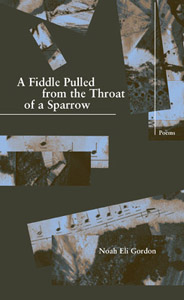 A Fiddle Pulled from the Throat of a Sparrow

Winner of the 2006 Green Rose Prize

“You can fairly hear the pinging of the world and all its parts—noises of earth’s objects rubbing against each other and the spheres. In this ebullient music find the translation of colors, shapes, space, speech, integrity, destruction. It’s as if the world’s most believable cape were thrown back and below we found not a sham of seasons but all the body’s most dynamic possibilities.”
––Eleni Sikelianos

“Such a new century deserves the sexual, the scientific, and the utterly secular pleasure of building a poem with the tectonics of a great bridge. So little pathos and so many paths. Broken like the heteronyms of Pessoa, but filled with multiple lives, Noah Eli Gordon teases all false monumentality yet reserves its rights to memory. To call it witty or wild isn’t witty or wild enough and leaves out the cavalier, the paideia, and structural surge. He has the restless tones and narrative density of a septet. His work itself glows green with surprises. He is a painter, of course.”
––David Shapiro

“I am inclined to read Noah Eli Gordon’s new book from the perspective of a thousand years, when nature and artifice will have fused into bird-encircled circuitries of song. In other words, in other worlds, is where this writing’s sand-clock accumulates its evidence. Yet Gordon demonstrates that, even as names fall away from their referents, they also claim the right of return. Here, every word holds its own echo, as if spoken inside a space helmet, and assumes a vexed convexity of mirror that allows the accidental to slide into the essential.”
––Andrew Joron

” . . . the 33 archly titled poems and sequences in Gordon’s fourth collection attempt to assemble, sometimes like a computer running a poetic algorithm, a hallowed new world flush in art and music. Written with exactness (sonnet sequences, a series of seven line poems, anaphora, etc.), the pieces are thickly smattered with the bedrock and easy emotion of the deep image, the hipster-abstract, and bible-ese: ‘the sound of smoke // was that of expansion // but the breaking of bread // like a dusk-shadow // became a name // losing itself in echo.'”
––Publishers Weekly

“Noah Eli Gordon’s A Fiddle Pulled from the Throat of a Sparrow, his second of three books to be released this year, is, perhaps, his most assured and cohesive exploration into the spaces between noise and silence, language and objects.”
––American Poet, Fall 2007

“If Sparrow is interested in cultural noise, it’s also trying to find a use for the human voice. What a lovely-true thing it is to hear a poet declare: “the earth a synonym for self, for you are here & otherwise” (“New Hymn”). He ends with “A Little Book of Prayers,” a final salvo of three lyrics that holds the “weight of dove & the waiting dove.” In this thoroughly strummed collection, acts of replacement discover the relational prolixity of the world and so return syllabic specificity to the mouth, that fiddled lyre.”
––Matthew Cooperman, Jacket 34 — October 2007

“It’s not true (despite Walter Pater’s quotable claim) that all art aspires to the condition of music. It is true, though, that if your art involves language—if you are, for example, a poet—and you avoid consecutive, propositional, discursive, so-called prose sense, you might want to find in music some analogies and models that explain how your art can cohere. . .”
––Stephen Burt, The Believer Magazine, Nov/Dec 2007 Issue

“. . . a book worth working at, filled with phrases that glow like polished glass, that echo with harmony, that sing with music, that, esoteric as it may seem, rings with a serene, subdued beauty.”
––Mike Maggio, Phoebe Blog

Noah Eli Gordon’s books includeNovel Pictorial Noise (selected by John Ashbery for the 2006 National Poetry Series), Inbox (BlazeVOX, 2006), The Area of Sound Called the Subtone (Ahsahta Press, 2004; selected by Claudia Rankine for the Sawtooth Prize), and The Frequencies (Tougher Disguises, 2003). Ugly Duckling Presse recently published That We Come To A Consensus, a chapbook written in collaboration with Sara Veglahn. His reviews and essays have appeared in dozens of journals, including Boston Review, The Poker, 26, Jacket, and The Poetry Project Newsletter. He writes a chapbook review column for Rain Taxi, and teaches at the University of Colorado at Denver.