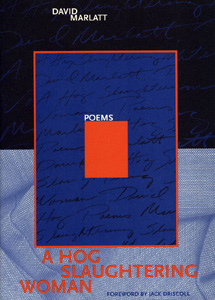 “Reading A Hog Slaughtering Woman is not unlike discovering a box of daguerreotypes in the attic of an abandoned farmhouse or barn loft. Portraits: Katherine Daley, Katie Teppe, Uncle Frank, Roy Nickol, Great Grandma Agnes who tossed ‘her slop pot / out the upstairs window every morning.’. . . Preserved here is a community of rural folk whose histories Marlatt so fully imagines that each character steps magically from still-life back into this world where past and present co-exist.”
—Jack Driscoll, from the foreword

“It’s as though David Marlatt has imagined a four-generation novel set in rural Michigan and then lifted out the sharpest, most poignant and suggestive scenes to make poems of them––Gram snapping beans when the Jehovah’s Witnesses come around to inquire after her soul; sister showing the bruise where the horse kicked her; Frances Woodburry driving her Falcon into a hog. Details, voices! Marlatt’s eye is attentive and generous and his language memorable, with never a false or showy turn. The book wins our trust immediately and lures us into is queerly resonant world.”
—Conrad Hilberry

“A sister kicked by a horse, a stray hog run down by a Falcon sedan, a glimpse of a grandmother’s hair undone, a man killing blue-gill with a spoon–these and other incarnations achieve, in David Marlatt’s testimony, the grim and wondrous power of icons and relics. These are poems that disturb and endear us to the species we recognize – not always with gladness – as our own. In A Hog Slaughtering Woman, the blood offerings, sacrifices, gospels and gossip, love and losses that we call ‘family’ are, as in eh accent liturgies witnessed, celebrated, sung outright. David Marlatt’s is a welcomed debut.”
—Thomas Lynch

David Marlatt still lives on the farm where he was born, near the village of Richland, Michigan. He is also a musician who plays trombone, bass sackbut, and fiddle. His poems have appeared in Nimrod, Passages North, Poetry Northwest, Sycamore Review, and elsewhere.