A Passion According to Green by Mark Irwin 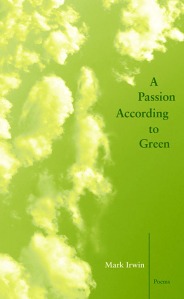 A Passion According to Green

“In one of the startling and bracing poems in his new collection, Mark Irwin writes, ‘I believed that language could save us from the temporal.’ It might be said that all lyric poems derive from this heartbreaking and Quixotic longing. Yet Irwin is a writer undaunted by the lyric’s insufficiency. He makes from our confusion and bewilderment a poetry of propulsive language, imaginative depth, and a wounded moral authority that recalls the work of Milosz, Herbert, and Szymborska. In other words, Mark Irwin fashions poems that matter.”

“The very fiber of this collection is like the dream of a once- house the poet is always trying to return to, the birthplace of his personal duende, what Bachelard calls our oneirically definitive dwelling place. Even if the houses/spaces he travels back to are not literally Irwin’s first home, they’re imbued with the same power, a means into his past.”

“Large White House Speaking is a book of startling marvels and terrible losses explored in poetry so sharp and bright it is song. Mark Irwin faces the world and brings it to these pages in strange imagery, high wire lines, with the precision of a surgeon. He is one of our best poets, and this is his best book yet.”

Mark Irwin is the author of nine collections of poetry, which include A Passion According to Green (2017), American Urn: Selected Poems (2015), Large White House Speaking (2013), Tall If (2008), Bright Hunger (2004), White City (2000), Quick, Now, Always (1996), and Against the Meanwhile: Three Elegies (1988). He has also translated Philippe Denis’ Notebook of Shadows and Nichita Stanescu’s Ask the Circle to Forgive You: Selected Poems. His poetry and essays have appeared in many literary magazines including The American Poetry Review, Agni Review, The Atlantic Monthly, Georgia Review, The Kenyon Review, Paris Review, Pleiades, Poetry, The Nation, New England Review, New American Writing, The New Republic, and The Southern Review. His collection of essays, Monster: Distortion, Abstraction, and Originality in Contemporary American Poetry, will appear in 2017. Recognition for his work includes The Nation/ Discovery Award, four Pushcart Prizes, two Colorado Book Awards, the James Wright Poetry Award, and fellowships from the National Endowment for the Arts, and the Fulbright, Lilly, and Wurlitzer Foundations. He is an associate professor in the PhD in Creative Writing & Literature Program at the University of Southern California and lives in Los Angeles and Colorado.