A Swindler’s Grace by Adam LeFevre 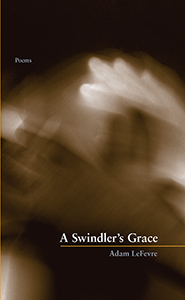 “I’ve waited for more than twenty-five years to be able to hold in my hands a new full-length collection of poems by Adam LeFevre, one of my very favorite poets ever. A Swindler’s Graceis a wry and ribald psalter, an American almanac of historical dismay. With an unflinching knife-blade of intelligence, Adam LeFevre underscores his lines with an oblique yet quietly elegant sense of disconnect – he lets us understand that we’re not feeling what wethink we should be feeling. No poet of my generation is more accomplished at making a world so clearly askew on its axis feel, in its luminous abstractions, more properly aligned. Adam LeFevre is a master, a magician, and the most gracious swindler in American poetry.”
—David St. John

“You will not find this voice and vision anywhere but in the poetry of Adam LeFevre.A Swindler’s Grace carries the gravity of life on Earth in a voice by turns bodied and disembodied. It inhabits others with as clear eyes as it does the self. Don’t put this collection in the bookshelf. There are poems here you will want to keep in view. It’s brainwork and heartwork of a high order.”
—Marvin Bell

Adam LeFevre was born in Albany, New York in 1950, and raised in Coeymans, an old Dutch hamlet on the west bank of the Hudson River. He studied at Albany Academy, Williams College, and the University of Iowa. After a stint of itinerant labor across the country he settled in New York City and began a career as an actor, on and off Broadway, in television and film. His previous collections of poetry are Everything All At Once, from Wesleyan University Press, and Ghost Light, a chapbook from Finishing Line Press. His plays have been produced in New York City and regionally. He is the father of two grown children, Tate, an anthropology professor at Franklin and Marshall College, and  Isaac, a film-maker. He currently resides in New Paltz, New York.