We hope you’ll join us for this upcoming reading , October 8th, 8PM EST. 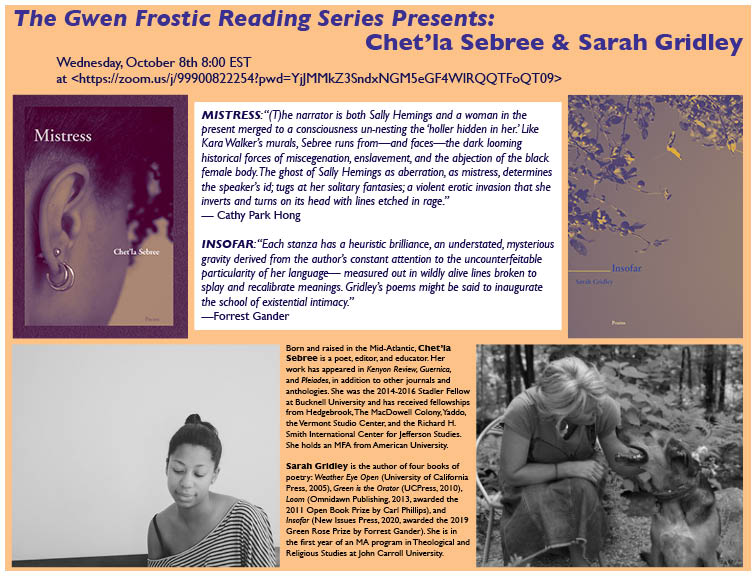 Please join us for an author conversation with Ginger Eager, author of The Nature of Remains, winner of the AWP Prize for the Novel.

The reading and tribute portion of our program will run from 2:30-3:00.
All final bids for the silent auction must be received by 3:45.
Unable to attend, but want to bid? Please contact us at new-issues@wmich.edu.

Ceramics from the collection of Shirley Clay Scott and Herbert Scott 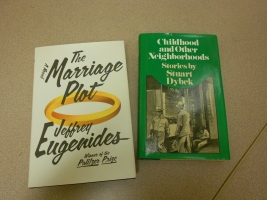 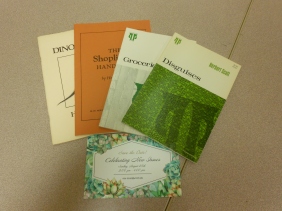 Processed with VSCO with 1 preset 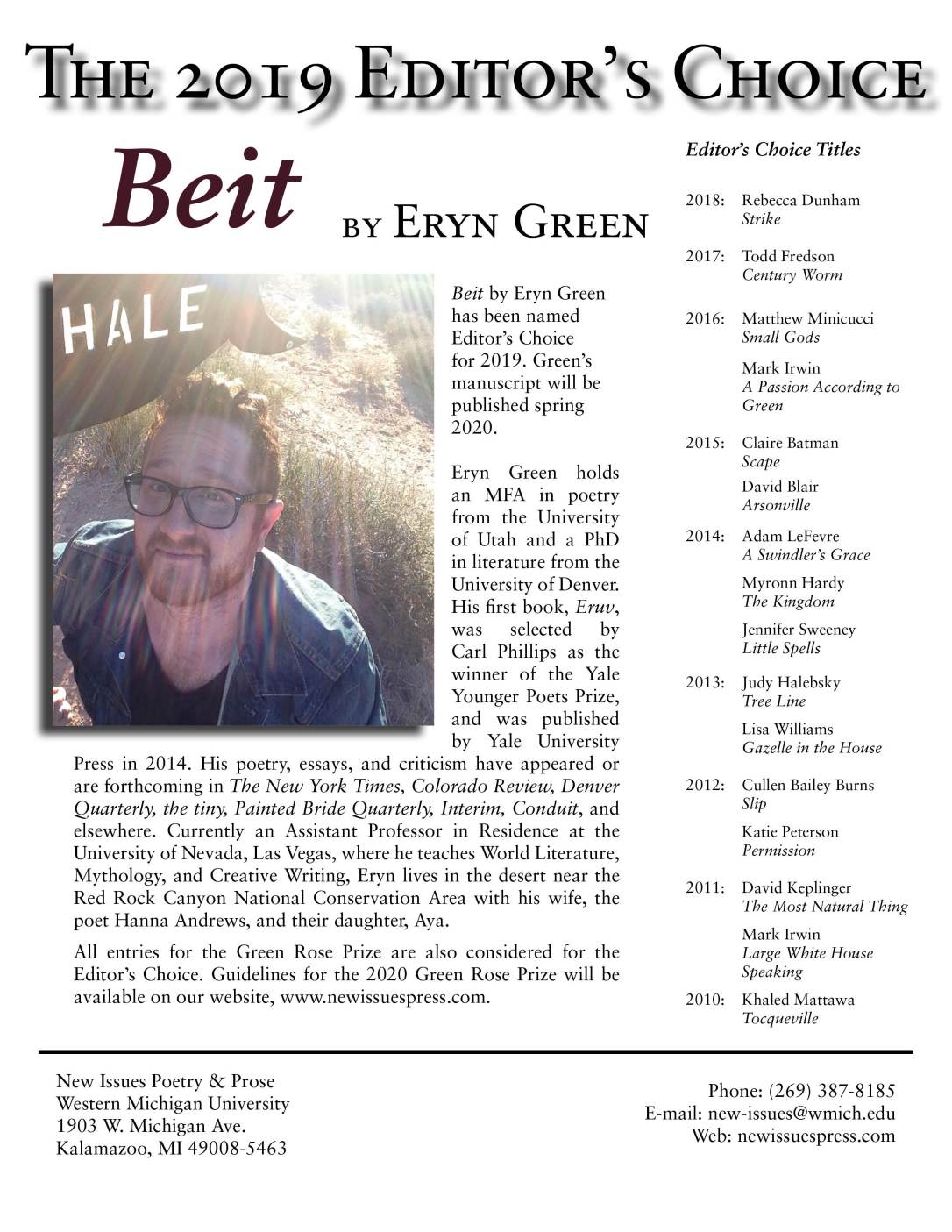 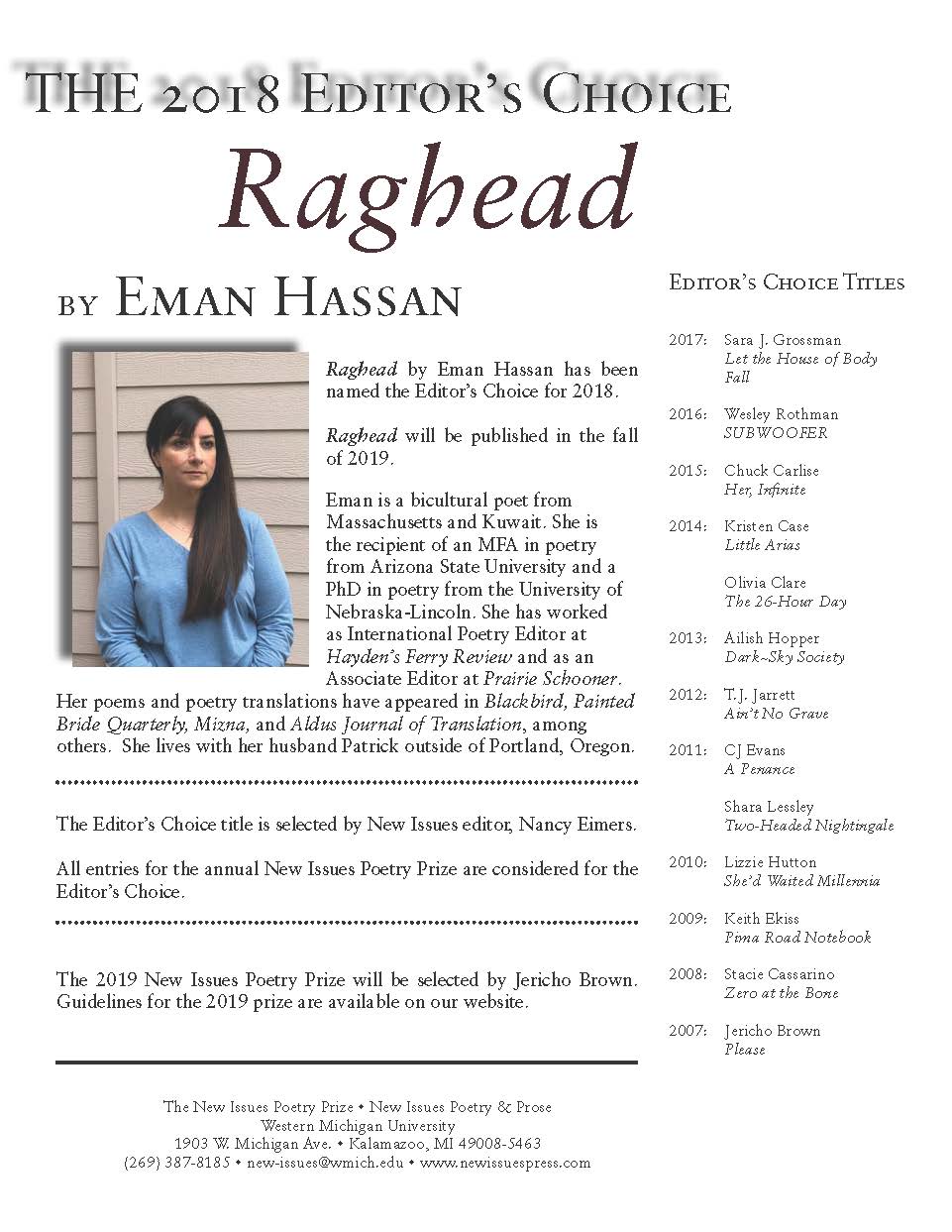 Please join us for our upcoming reading! 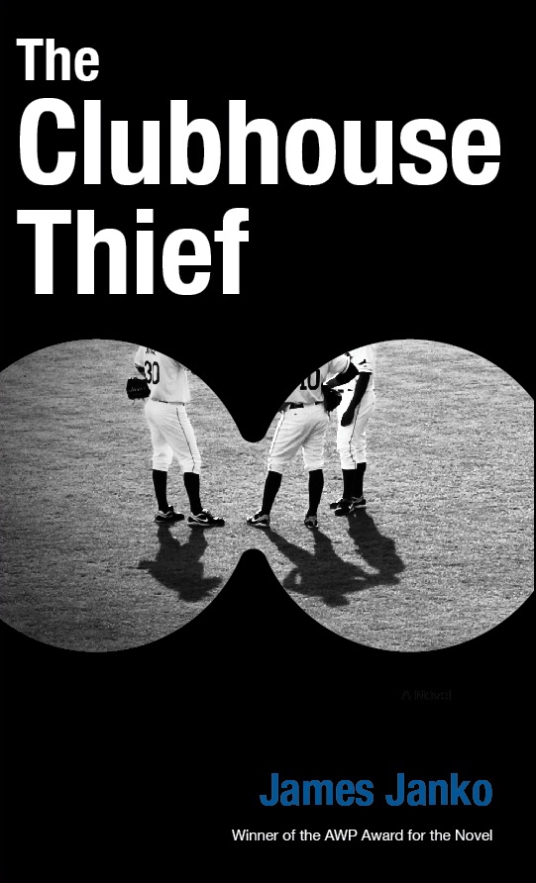 On April 13th, poet Myronn Hardy and novelist Carol Zoref will read as part of the Gwen Frostic Reading Series. 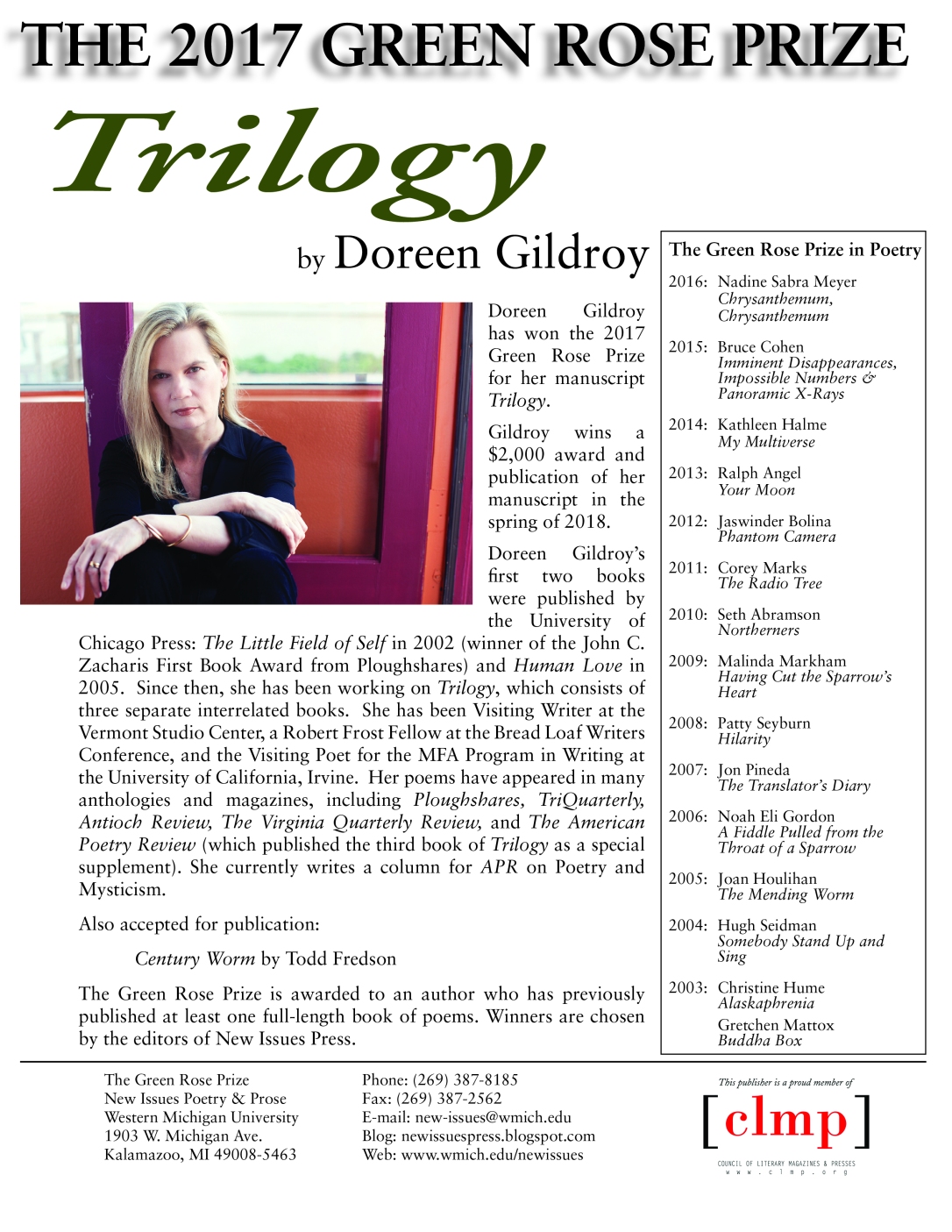 Looking forward to this!

Enjoy a poem from Katie Peterson today from Poets.org:

from “After Dinner Was Over” Poems

Congratulations to Charles Boyer, winner of the GLCA New Writers Award for Fiction!

“Boyer reveals what it means to remain a moral human being in the face of totalitarian power and brutality. This is a novel that reminds us of the power of fiction to teach us empathy and to help us understand how precarious freedom truly is. It is a masterful novel, one that is necessary for our times.”

The Academy of American Poets

Read Jennifer K. Sweeney’s new poem “Poem for My Son in the Car.”

Poem for My Son in the Car
The wipers sweep two overlapping hills
POETS.ORG

“A series of intimate and captivating interviews by Rachel Zucker with poets and artists about quotidian objects, experiences or obsessions, Commonplace conversations explore the recipes, advice, lists, anecdotes, quotes, politics, phobias, spiritual practices, and other non-Literary forms of knowledge that are vital to an artist’s life and work.” Enjoy!

Episode 16: Jericho Brown
Host Rachel Zucker speaks with award-winning poet Jericho Brown about the differences between poetry and journalism, the role of truth and facts in poetry, the complexities of separating a poet’s autobiography from the work especially in the…
COMMONPODCAST.COM

In One Version of the Story by Chuck Carlise received a great review from Publishers Weekly:

Fiction Book Review: In One Version of the Story by Chuck Carlise. New Issues, $16 trade paper (120p) ISBN 978-1-936970-45-2
In this haunting debut, Carlise creates an ars moriendi out of the legends of L’Inconnue de la Seine, an unknown woman who drowned in the Seine River in the late 1880s—and who was immortalized…

5 Over 50 Reads | Poets and Writers
A roundup of new and emerging authors over the age of fifty whose debut books were published during the past year: Desiree Cooper, Sawnie Morris, Paul Vidich, Paula Whyman, and Paul Hertneky.
PW.ORG 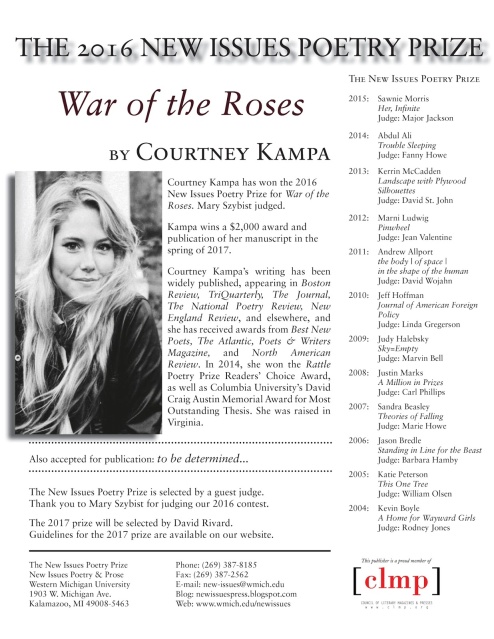 Posted by New Issues Poetry & Prose at 12:25 PM No comments:

Posted by New Issues Poetry & Prose at 11:04 AM No comments:

Posted by New Issues Poetry & Prose at 8:37 AM No comments: 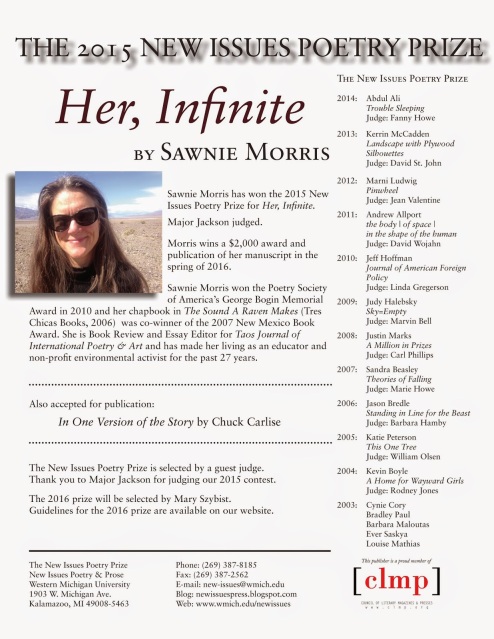 Posted by New Issues Poetry & Prose at 12:11 PM No comments: 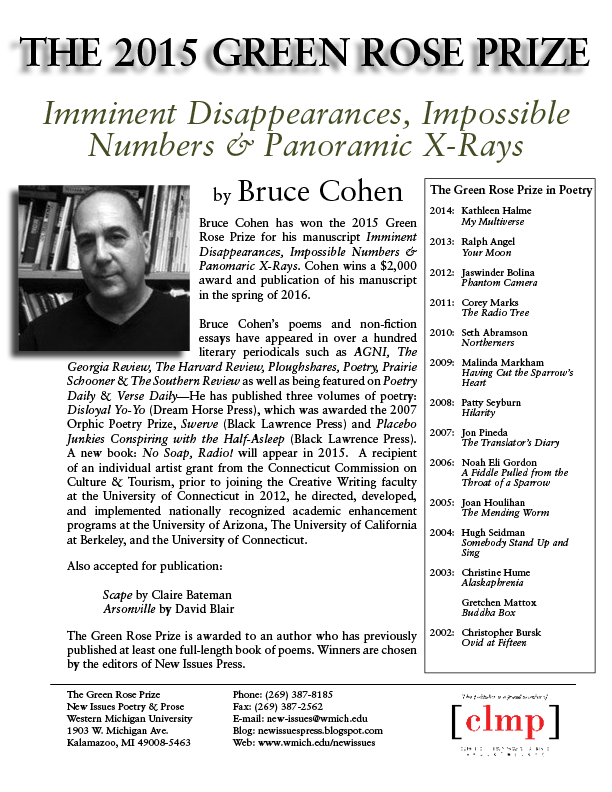 Posted by New Issues Poetry & Prose at 9:54 AM No comments: 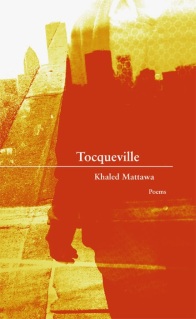 From the LA Times:
“The poet, translator and University of Michigan professor won admiration from the MacArthur Foundation for ‘rendering the beauty and meaning of contemporary Arab poetry to an English reader and highlighting the invaluable role of literary translation in bridging cultural divides.'”

The trick is that you’re willing to help them.
The rule is to sound like you’re doing them a favor.

The rule is to create a commission system.
The trick is to get their number.

The trick is to make it personal:
No one in the world suffers like you.

The trick is that you’re providing a service.
The rule is to keep the conversation going.

The rule is their parents were foolish,
their children are greedy or insane.

The rule is to make them feel they’ve come too late.
The trick is that you’re willing to make exceptions.

The rule is to assume their parents abused them.
The trick is to sound like the one teacher they loved.

And when they say “too much,”
give them a plan.

The rule is everyone is a gypsy now.
Everyone is searching for his tribe.

The rule is you don’t care if they ever find it.
The trick is that they feel they can.

Khaled Mattawa was born in Benghazi, Libya in 1964 and immigrated to the U.S. in his teens. He is the author of three previous books of poetry, Ismailia Eclipse (Sheep Meadow, 1995),Zodiac of Echoes (Ausable, 2003), andAmorisco (Ausable, 2008). Mattawa has translated eight volumes of contemporary Arabic poetry and co-edited two anthologies of Arab American literature. He is currently a Chancellor for the Academy of American Poetry, and has received a Guggenheim fellowship, an NEA translation grant, the Alfred Hodder Fellowship from Princeton University, the PEN American Center Poetry Translation Prize, and three Pushcart Prizes. Mattawa teaches in the MFA (Creative Writing) Program at the University of Michigan, Ann Arbor.

Posted by New Issues Poetry & Prose at 9:00 AM No comments:

Posted by New Issues Poetry & Prose at 10:11 AM No comments: