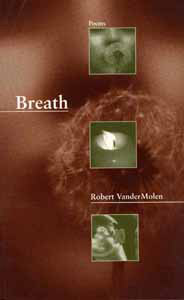 “These poems by Robert VanderMolen are, in their ordering of local particular, their oblique, ranging memory, their curious, almost dream-like asides, among the most remarkable literature of our time. A large stillness radiates from them; and an uncommon depth, as well, that sends them into one’s mind and keeps them there.”
—August Kleizahler

“When you read Breath, by Robert VanderMolen, prepare to be surprised, delighted, and unsettled –– just as the driver of a car whose heater doesn’t work, in one of his poems, when he discovers that ‘one warm Spring day / When the vent was opened / the car was filled with bees.’ VanderMolen’s poems are always kinetic, always on the move, and among the sexiest being written in America today. Read ‘Saturday’ if you want to experience VanderMolen at the top of his form. He has a knack for quoting real or imaginary dialogue that is both funny and very much to the point: ‘The older you get / The worse you look without money,’ for example. He splices with assurance; he jump-cuts with ease.”
—Richard Tillinghast

“In Breath, Robert VanderMolen finds and propounds the courage to hold himself accountable for the unaccountable consequences of Attention, of Vision. Thus his is a law without bounds and an unconditional mercy. The Sublime is always inappropriate, and VanderMolen delights in sublimity without shame. Honor him.”
—Donald Revell

Robert VanderMolen has been publishing poems in such periodicals as Caliban, Cincinnati Poetry Review, Epoch, Grand Street, Parnassus, and Sulfur,since the mid-1960’s. Previous collections of poetry includePeaches (Skybooks),Circumstances, and The Pavilion(both from Sumac Press). As a rule, four times a year he heads up to a cabin in the Upper Peninsula of Michigan for extended stays. VanderMolen lives in Grand Rapids, Michigan.