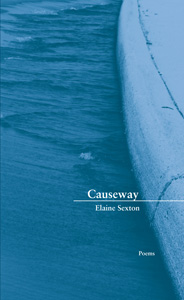 “In their plainspoken engagement with the actual world, Elaine Sexton’s poems are models of crupulous attention, alert to the simple truth that everything is ‘part of some bigger mystery’ so even a fish can sing a ‘psalm,’ a simple shoe be the subject of one. The poems in this impressive second collection contain the sound of a consciousness meditating on what is passing in the world and abiding in the heart and mind. Elegy without sentimentality seems a natural part of Sexton’s keen-eared lyric manner and, in every sense, responsibility. Lodged in various locales, whether urban or rural, earthbound or on the open sea, answering a landscape, a family memory, or the vagaries of love, the poems ofCauseway are always informed by an honest buoyancy of spirit that can mix ‘the scent of lilacs’ with ‘smokers’ coughs,’ as imagination testifies to the hard-won realization that ‘Even in these / toxic times, we live, we thrive.’”
—Eamon Grennan

“‘Happiness in love, what a joke,’ Paul Eluard wrote to Gala in a letter dated 6 March, 1933, and three-quarters of a century later Elaine Sexton, in her second superb volume, struggles against such cynicism in poems that address ‘every estuary’ of love — filial love, romantic love, spiritual love — without refusing ‘to taste the grit.’ Again and again the poet attempts to reconcile herself to ‘the everyday obscene,’ always ‘searching for home / in a thrift shop find, something a mother, / not yours or mine, left behind.’ Causeway celebrates the probability of such human connection in poems taut and insistent and resonant with desire. When Sexton writes, speaking for us all, ‘[T]he ones / who love me love me, god knows why,’ we know she’s not quite joking.”
—Michael Waters