Each Tree Could Hold a Noose or a House 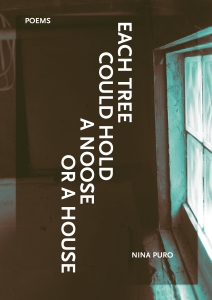 Puro questions global and personal history alike in a lithe, graceful dreamscape of a debut that addresses culpability, ignorance, hope, free will, intimacy, and more. “We are all part of a current, it is said, but perhaps it is dark. We become agents to projects we didn’t know existed,” Puro writes. The world described within is marked by legacies of trauma and violation on various scales, whether in regard to the effects of colonialism (“the Catholic church built around the holy Pueblo dirt”) or sexual violence (“was she a runaway, pregnant, kidnapped, hospitalized, a refugee, to return or not, partially or fully”). Stylistically, a stream of consciousness engages and retracts as Puro employs incisive wordplay, repetition, use of white space, and disjointed syntax that results in a sense of immediacy and unity. Meanwhile, a series of elegies displays Puro’s dark humor: “they’ve cordoned off/ our block with coffeeshops/ like they’re making a moat.” Throughout, Puro challenges readers to confront their own perceptions and discover what lies beneath: “This riot is not/ A fable or a metaphor. I am telling/ You the truth. I am telling/ You everything. I’m making/ A face under my face.” —Publishers Weekly

The personal is political for Puro, too: The anguish and drama in this capacious first volume arise both without and within. It’s a tumultuous, unguarded collection of free verse in many contours, modes and sizes, some nearly baroque in their deep-delving obscurity, some plainly confessional, devoted to troubles shared by many women and girls: “If I had gone to prom or college instead of hospitals, if I’d had family or mentors, would I have become a queer poet?” Eating disorders and exurban isolation add to the pain in the voices that Puro shapes, in which “love is a transactional convolution. Breath is cheap.” Her poems tend to end up dramatic, breathtaking, alive with an almost self-immolating energy inseparable from youth, “hordes of kids riding bareback / off cliffs with satin ribbons in their hair & the horses’ manes.” Puro also shows her invention in her long titles: “How to Arrest Time by Crushing Rust to Powder”; “elegy with five-finger discount on smallpox blanket.” Some poems organize themselves around extended sentences and new metaphors for heartbreak or outrage, exploring the rough country located halfway between Dylan Thomas and Tori Amos. Others exhaust themselves in page-long lists or pinch themselves into tiny lines. For all her attention to the hot, colorful self, Puro (now a social worker in Brooklyn) understands the social and structural elements — rigid gender roles, geographic isolation, economic wrongs — that brought her troubled figures to this pass: “The dead girls miss us, but not much. … They miss neon afghans. They do not miss the police.” —Stephanie Burt, New York Times

“Nina Puro so moves me, through both an open hearted, musical expansiveness and a self-honest skepticism about the ultimate powers of language and insight. Everywhere in this remarkable first book I feel the writing bringing me closer to the life lived—it speaks of and to that life with intimacy and vulnerability. But Puro is no confessional, and their perspective is not singular or merely personal. Each image is multiplied and transformed into another, and the opacity that results is complex. This is a poet with a 360-degree vision, especially around anything having to do with gender and sexuality: ‘we are all part of a current, it is said, but perhaps it is dark.’ Each Tree Could Hold a Noose or a House made me think of the poetry of both Adrienne Rich and George Oppen, in the courageous power of its imagination, in its will to change, and its refusal of the blandishments of the period style.  It’s that good.”—David Rivard

“I love these poems. They are romantic, full of stuff, shape shifting, gendered, dark and political. And I am never bored. I have not read these poems before. They are not outside their canon yet they improve and expand it. Like this: often poetry is what you do instead of reading a novel but here you can just do both. And I don’t mean that formally. The pleasure is different but the same. They’ve got some pain and some weight. I mean they’re muscularly true. I want more so I’m going to read this book backwards now.”
—Eileen Myles

Downstream, the multiplex eddies of Nina Puro’s words go round a silence, an invisible island. It’s the silence of a question being formulated: what is action? How do we know what to do? How-to: Nina Puro writes that we Have-to, there is no other choice.

Than to pose the if if if. Insist on asking the right question — as spell or tune or gesture or whatever—

‘I beat time with my hands on the sill.’

‘there are fists flying inside me.’

‘how much of grief is a performance to the dead?’

Poems that feel alive. On the run. Pretty soon it’s like you’re flying. The world is so articulated, so like our own: the whole 360 degrees. Incisive, a poetry newsreel — if H.D.’s “Heat” covered the Cuyahoga River Fire.

Singularity takes a poetic form: questionnaire and yearbook and guide, landscape and stage. An experiment in hope. Step down and up into the space of these poems with care and trust equal to their leap of faith.

‘I love being here

Reading Nina Puro’s book made me not afraid of fear.” —Ana Božičević 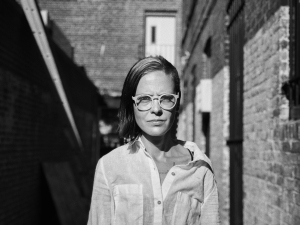 Nina Puro’s writing is in Guernica, the PEN / America Poetry Series, Witness, & others, including chapbooks from Argos Books and dancing girl press. They are a member of the Belladonna* Collaborative and recipient of fellowships from the MacDowell Colony, Syracuse University (MFA, 2012), Deming Fund, & others.

Nina is a social worker in Brooklyn, NY.