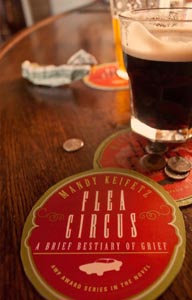 AWP Award Series in the Novel

Pascal’s Wager and performing fleas. The Haunted Mansion of Long Branch and an old dockside bar. Raceway Park and a pristine 1971 Plymouth Road Runner. A cat named Altamont. These are all that stand between a young mathematician and madness as she attempts to make sense of her lover’s suicide. Narrow margins, you say? Not much to place between a slip of a broken-hearted Jersey Girl and the Abyss? Indeed, it is a treacherous twelve seconds on the quarter mile, hilarious and harrowing by turn. Blink and you’ll miss it.

I was drawn to the sheer strangeness of the writer’s project: the lyrical, tough-talking high-low lament of a Jersey Girl who cannot, who will not, and who essentially luxuriates in her refusal to get over the suicide of her lover. A simultaneously reckless and calculated intensity permeates this novel, in which the most important event has already happened, and the narrative arc (if we can call it that) is mostly ruminative and interior. Fairly soon, we realize that the narrator is playing with language, with the alphabet, even; it’s not accidental that the epigraph is taken from Georges Bataille. But for me the real surprises were less about letters than about voice, about sentences and about the paragraphs that nearly always ended in a different place (and more interestingly) than I might have predicted.
—Francine Prose, from the Judge’s Citation

Flea Circus is a remarkable book. This is a fearless, deeply moving, and wholly original work, finely written and exquisitely devastating. Mandy Keifetz is a writer of unusual talent and depth.
—Emily St. John Mandel, author of The Singer’s Gun

(Flea Circus) simply dazzles. The novel takes the reader to the dark place where reason and love collide and collapse under the oppressive weight of loss. A tour de force.”
—Kirkus Reviews

Izzy’s enthralling voice pulls the reader through each heartbreak and revelation. VERDICT The experience of Keifetz’s second novel (after Corrido) is less like reading a book than having a frighteningly intimate conversation over coffee. A must for fans of literary fiction.
—Library Journal 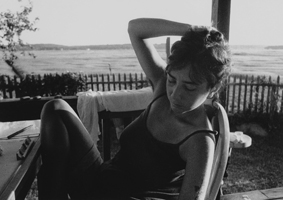 Mandy Keifetz is a 4th-generation New Yorker. Her work has appeared in .Cent, Penthouse, Vogue, The Review of Contemporary Fiction, and other ‘zines too numerous to count. Her first novel, Corrido, has been optioned by a UK production company. She was a Fellow with the New York Foundation for the Arts in 2002 and her plays have been staged in New York, London, Cambridge, Montréal, and Oslo. She is an occasional MFA dissertation defense panelist at U-MASS, Amherst. She lives in Brooklyn with an opera composer, their child, and an exuberant hound dog.