AWP Award Series in the Novel

Tadek Gradinski grows up witnessing the multiple invasions and crimes of World War II sweep over his village.  After the war, at fourteen, he begins to run messages and guns for the anti-Stalin diehards still hiding in the woods.  At seventeen he’s leading a double life, falling in love with a village girl, and dreaming about marriage and a job, while spying on NKVD agents at night. But someone betrays the partisans: their camp is destroyed; Tadek is arrested, tortured, and swept away into the Gulag with a twenty-five year sentence.

“History’s Child tells the closely focused tale of Tadek Gradinski –a survivor of the harrowing history of our troubled time.  Born in a Polish village on September 24, 1931, Tadek endures horror after horror and loss after loss, yet his story blossoms into an act of affirmation; neither prison nor privation, the Gulag or grief and betrayal can break his hopeful heart.  Charles Boyer has, and his aptly titled debut novel is, a gift.”
—Nicholas Delbanco, The Years

“History’s Child is a work of natural beauty—or rather the beauty of its artifice is so intelligently and lovingly constructed on such fine-grained level that itappears natural; it mimics the natural world with seeming artlessness. I mean, by that last part, that this book masterfully renders the subtle electricity of life as it flows and flashes through the eyes of people and animals, animating the wings of insects and the strange hearts of human beings; it renders the beauty and mercilessness of the world. …History’s Child is very much about Poland and Belarus and the spirit of those that live there. However, it is also very much about people anywhere and everywhere trying to maintain humanity however they can in a world of gross power and abuse. As such it is something that “we,” as citizens of what is still the most powerful country in the world, would do well to pay attention to.”
—Mary Gaitskill, The Mare, from the judge’s citation 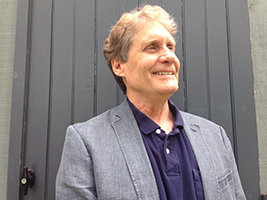 Charles M. Boyer grew up in Illinois and Wisconsin and went to Beloit College, but has lived in New England for thirty years. He has an M.A. in fiction from the University of New Hampshire, and teaches English and Humanities at Montserrat College of Art.  He has received a grant from the Wisconsin Arts Board and a Fellowship from the New Hampshire State Council on the Arts, and has published poems and stories with The Atlanta Review, Abraxas, Livingston Press, Literal Latte, and other venues.  He lives in Wellesley, Massachusetts, with his family.

History’s Child is loosely based on the life of Charles Boyer’s father-in-law, who worked with anti-Stalin partisans as a teen and was captured by the Soviets and sent into the Gulag at the age of seventeen.