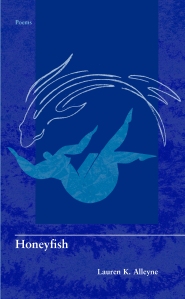 “These poems love. Prophesize. Return us to our beginnings. To days that we want to remember. Or forget. But don’t. Thus in our sister’s memory, we survive in the luxury of dying. The courage of loving. The re-imagining of our souls for another generation. Thank you, my dear sister for your words saluting our living, our lives.” —Sonia Sanchez

“In exquisitely crafted poems of heart-accelerating candor and clarity, Lauren K. Alleyne says to all the black bodies slain by hatred and militarized fear, “Nothing I say will save you, but how can I say nothing?” Honeyfish is an elegy for all the countless lost, and a praise song for the many black lives that persist in their wish to give and receive love.”—Tracy K. Smith

“Even in the places we think of as most beautiful, the endless gong of the body being broken and defiled will find us. How can we see the sun and the ocean and the clear blue sky as anything other than a kind of cruel joke in the face of so much suffering? The extraordinary gift of Lauren K Alleyne’s, Honeyfish is that she shows the world in all its brutality and loss and somehow lets us mourn within the poems, which in turn allows us to begin some kind of healing. These are poems whose elegy is ongoing, whose elegy need never happened but for hatred. The waves go in and out and so many people keep being killed. And here is this extraordinary poet, making a heaven that is freedom, that is the dream of being welcomed and loved and tended to. This is a book for our times and for the day when these times are over and we can rejoice.”—Gabrielle Calvacoressi

“After Trayvon Martin, after Tamir Rice, after Sandra Bland, after Charlottesville and Charleston, after, after: Lauren K. Alleyne’s poems answer the alarm. In Honeyfish, there is no end to elegy: the poet “can’t stop counting/the bodies,” nor tallying “our numbered days.”  Moving between the United States and Greece, yanked between agony and anodyne, Alleyne gathers the evidence, then offers us the proof of herself and the graceful testimony of her poems.”—Christopher Bakken

“Honeyfish is a remarkable, timely and timeless collection. Awake and unflinching, it bears witness to our difficult current moment—Tamir Rice, Charlottesville, the Charleston church shooting—and yet, in the face of horror and injustice, the poems celebrate the resilience and persistence of beauty and love, the languages we have lost, the grief unburied, the dream remembered. Lauren K. Alleyne comes into her own here as a voice we must reckon with, and her lyrical powers attest to a necessity we find only in our most valued poets.”—David Mura

“In poems spun from seemingly effortless language, Lauren K. Alleyne’s piercing voice emerges. Honeyfish sounds a litany of grief for home, country, and lives in danger of being erased from personal and collective memory. Naming the victims of racism and police brutality—Trayvon Martin, Tamir Rice, Sandra Bland…—Alleyne places their stories alongside her own, as a black woman and immigrant to the US. The task of remembering the poet shoulders is replete in the forms the poems often take: the elegy and ars poetica. Alleyne bears witness to the ‘world ruthless with beauty,’ and her poems are a singular act of resistance and power. “Who will sing you?” the poet asks, at one point—which is another way to ask, who will see and honour those who are gone? The answer is found in these compassionate, impassioned, and clear-eyed poems: This poet. This book.” — Shara McCullum 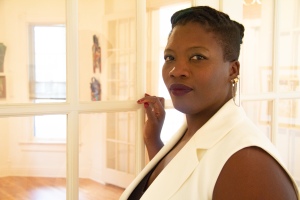 Lauren K. Alleyne is the author of Difficult Fruit (Peepal Tree Press, 2014) and Honeyfish, (2018 Green Rose Prize, New Issues 2019). Her work has been widely published in journals and anthologies such as The Atlantic, Ms. Muse, Women’s Studies Quarterly, Guernica, The Caribbean Writer, and Crab Orchard Review, among others. Her work has earned several honors and awards, most recently first place in the 2016 Split This Rock Poetry Contest and a 2017 Philip Freund Prize in Creative Writing for excellence in publication. Alleyne was born and raised in Trinidad and Tobago, and is currently Assistant Director of the Furious Flower Poetry Center and an Associate Professor of English at James Madison University.