In One Version of the Story by Chuck Carlise 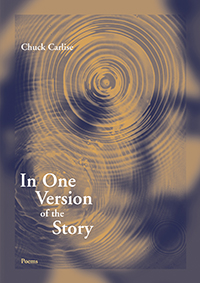 In One Version of the Story

“Chuck Carlise ties the past into the present in ways that are melancholic, haunted, and beautiful. You think you’re out of the nightmare, but you’re not. That’s / the joke. The nightmare wants to live, / & its hands are on the wheel.”
—Nick Flynn

“This rich and rigorous book draws on many sources, beginning with the famous legend of The Unknown Woman of the Seine. One learns that drowning in 19th century Paris was for women of a certain station the fashionable means of suicide. The idea that death could be an event one may plan and design—as an art, with an approving audience—becomes the murky center of these deeply meditative, interwoven poems. The notion is at once absurd, disturbing, yet ultimately believable. Stitched through this black tapestry is the poet’s more personal thread, tying him to an inquiry that has to do with the darkness of making anything absolute. Perfect beauty cannot live long; in fact, perfection of any kind is doomed. And yet the idea of perfection has been dangerously attractive for a long, long time.”
—Maurice Manning

“Out of our primal fears—drowning, freezing, losing ourselves—Chuck Carlise has fashioned an ingenuous libretto of inquiry and intrigue. While revealing the corporeal drama of girl and Seine, mask and mystery, he unveils a host of spiritual paradoxes: What does missing mean if an existence is uncertain? If we can tell a story ‘but not all of it,’ how do we claim knowledge of anything at all?”
—Martha Serpas 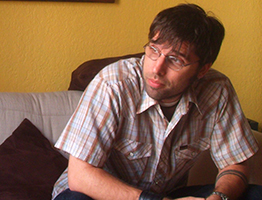 CHUCK CARLISE was born in Canton, Ohio, on the first Flag Day of the Jimmy Carter Administration, and has lived in a dozen states and two continents since. He is the author of two award-winning chapbooks – A Broken Escalator Still Isn’t the Stairs (Concrete Wolf 2011) and Casual Insomniac (Bateau 2011) – and his poems and essays appear in Pleiades, Southern Review, DIAGRAM, Hayden’s Ferry Review, and Best New Poets in both 2012 and 2014. He completed his Ph.D at the University of Houston in 2012, where he was awarded InPrint/Paul Verlaine Poetry Prize, and was Nonfiction Editor of the journal, Gulf Coast. He is currently a Lecturer in the Writing Program at UC-Santa Cruz. www.chuckcarlise.com