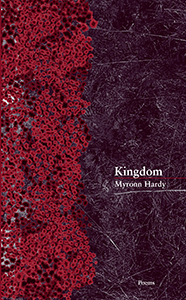 “In Kingdom, Myronn Hardy continues and extends his distinctive voice in the imagination of the traveler, whether the new land is in the heart or in the world. His precise vision and cadence form an exquisite lyricism. This is elegance, a deft wisdom won from the shadows where joy lives alongside loneliness.”
—Afaa Michael Weaver

“These poems are beautifully adept at both recognizing the traces of history upon people and places, and painting a portrait of the world of the present that etches any number of things—a forest of oaks and poplars, strangers in a market, or children playing ball in a village—viscerally and indelibly in the reader’s mind. But what captivates me most is the powerful subjectivity that characterizes these poems, the speaker’s urge to be imprinted by the world, to be claimed by it and changed. Reading Myronn Hardy’s Kingdom, I feel myself in the presence of a formidable mind and a heart that is emphatically alive.”
—Tracy K. Smith

“These poems bear the seasoned influence of the time this poet has spent traveling and living in North Africa and the Middle East. Myronn Hardy catches not only the harsh yet beautiful landscape and its colors washing the skins of the inhabitants’ lives, but the intimate anxiety of a man waiting to hear from his son after some news of a knife at the university, of a mother hearing the public chant bewailing ‘this daughter … our daughter!’ and looking at her life. In that world’s tradition of praise and longing to be one with the beloved, Hardy’s journey hits the deep root of resignation but discovers the even deeper resolution to go on.”
—Ed Roberson 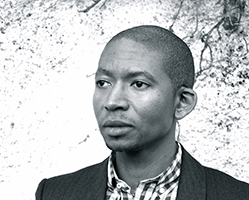 Myronn Hardy is the author of three previous books of poems: Approaching the Center, winner of the PEN/Oakland Josephine Miles Award, The Headless Saints, winner of the Hurston/Wright Legacy Award, and Catastrophic Bliss, winner of the Griot-Stadler Prize for Poetry. He has received fellowships from the Anneberg Foundation, Djerassi, the Bread Loaf Writers’ Conference, the Sacatar Foundation, and Fundación Valparaiso. He divides his time between Morocco and New York City.