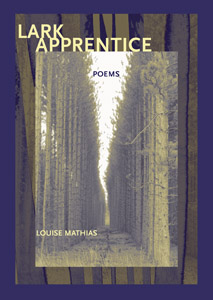 “The gestures in the lyric poems of Louise Mathias’Lark Apprentice are as swift and elusive as wings in flight. Always aware of the futility in efforts to settle, these beautiful poems are coerced into motion, pausing only briefly to ponder the secrets of yearning, of loss, and even the cosmos itself. Possessing a bold and dark sensuality, they entice us to follow their inexplicable paths, ‘Just our bodies, smart / with complications. And our mouths; / pink halos of effort / in the black apparatus of night.”
—Molly Bendall

“Lark Apprentice is a debut marked by the careful notation of proof and theorem rather than scrap-sheet desperation, yet why should this result instead in an artifice of calculation and clarity? Because the ‘big’ questions fortuitously elude the speaker’s math: ‘Why so long with your disbelief? Why insist that the life cut short / is worthy of drama? What if the proverbial / night, its angular presence, in time / could be softened, made right? Who, / this late in the game, was equipped for that? Have you always been literal/winter? Couldn’t you take a part at a time?’ Here, the sum of the parts generates ‘such a brutal equation’ that there is little difference between ‘the longer life’ and ‘the lush line.’ Mathias recognizes the ‘lush line’ was ever implemented not for the sake of beauty, but to counter the fact that mortal inquiry is always fraught with the danger of temporal collapse.”
—Richard Greenfield

Louise Mathias is the author ofLark Apprentice, which was chosen by Brenda Hillman for the New Issues Poetry Prize. Her chapbook, Above All Else, the Trembling Resembles a Forest, won the Burnside Review Chapbook contest and is just out from Burnside Review Press. Recent poems appear in journals such as Barrow Street, Ninth Letter, Triquarterly, and Third Coast. She lives in California. www.louisemathias.com