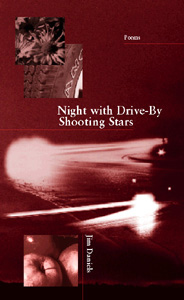 Jim Daniels’ collection bears witness to a life both mis- and well-spent: to the family, remembered and new; to the melancholy pull of drugs and casual sex; to growing up; and to the only tenable way of growing old, which is to embrace every small joy even as one laments its brevity. Indeed, Night with Drive-By Shooting Stars rages not against the dying of light but the dying fall itself—against poetic and existential complacency. “Louder, kids,” says Daniels in the beautiful “Cold Seed:” “daddy’s dying.” 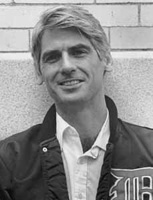 Jim Daniels is the author ofPunching Out, Revolt of the Crash-Test Dummies, and Show and Tell: New and Selected Poems, among other books and screenplays. His poems have appeared in Best American Poetryand the Pushcart Prize anthology. His awards include the Brittingham Prize for Poetry, and Fellowships from the National Endowment for the Arts and the Pennsylvania Council on the Arts. A native of Detroit, Jim Daniels now lives in Pittsburgh. He is the Thomas Stockham Baker Professor of English at Carnegie Mellon University, where he teaches in the creative writing program.