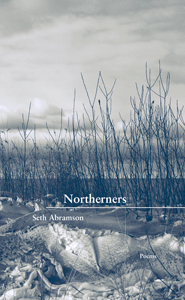 Winner of the 2010 Green Rose Prize

“From the first line of the first poem, this book takes us into mythical territory: mankind is walking backward, and it’s back into the garden, yet this is not regressive, nor is it redemptive. A little later, an apple appears . . . Seth Abramson’s genius lies in the ability to condense the power of our culture’s founding concepts into their particulars, and then to show how those particulars are every bit as alive today, and as relevant. And he shows it more through language’s muscle than through its meaning, for while he says a lot in this collection, it’s the torque and snap of the medium, used as a material for art rather than as a vehicle for ideas, that keeps the reader on the page, becoming a part of it.”
–Cole Swensen

“To reckon the currents of muscular energy in Seth Abramson’s Northerners is to recognize that poetry may be located in language’s minute particulars and in the local but it penetrates every thought, every atom of one’s daily life. ‘Finding your form / is not a form of discipline,’ Abramson writes. It is, as this book shows us, a form of wonder.”
–Peter Gizzi

“Seth Abramson’s intricate, absorbing, and distinctive poems wrestle not just with language — much poetry does that — but with the objects of language: the events, landscapes, and weather that surround us and determine our lives. Dream-like, yet ever-alert, this work is memorable and illuminating.”
–Don Share

Seth Abramson is the author ofThe Suburban Ecstasies (Ghost Road Press, 2009), and a contributing author to The Creative Writing MFA Handbook(Continuum, 2008). In 2008 he was awarded the J. Howard and Barbara M.J. Wood Prize by Poetry. His poems have appeared widely in magazines and anthologies, including Best New Poets 2008, Poetry of the Law,Lawyers and Poets, Poetry, American Poetry Review, New American Writing, Boston Review, The New York Quarterly, and elsewhere. A regular contributor toPoets & Writers, his essays on poetry, politics, and higher education have been cited online by The New Yorker, Rolling Stone, The Economist, The Los Angeles Times, Inside Higher Ed, Poetry Daily, Nerve, and others. He is a graduate of Dartmouth College, Harvard Law School, and the Iowa Writers’ Workshop, and is currently a doctoral candidate in English at the University of Wisconsin-Madison. From 2001 to 2007 he worked as a Staff Attorney for the New Hampshire Public Defender in Nashua, New Hampshire.