Winner of the 2012 Green Rose Prize

As full of candor and ontological inquiry as they are of verve, panache, and wit, the poems in Bolina’s second collection stretch and dilate, in order to, as the author puts it, “feel so attached—like a ligament—to the whole shebang of human experience.”
—Publishers Weekly

…a veritable tidal wave of verse, lines spilling forth propulsively and carrying with them keen observation of the everyday…sophisticated but eminently embraceable, a tip-off of what’s to come.
—Barbara Hoffert, Library Journal

Jaswinder Bolina’s second book of poetry is a stunning performance, as beautiful, accomplished, and memorable as any volume of poetry I’ve had the pleasure of reading. Arriving at the last poem in this fine work, all I could feel was a hunger for more, and the deepest gratitude for Bolina’s rare intellectual and artistic gifts.
—Charles Johnson

Phantom Camera searches for ways to escape the traps of autobiographical self-absorption while retaining the warmth and energy of personal narrative.  Bolina’s speakers are often melancholy and estranged, yet charmingly ironic about their estrangement.  Drama—both funny and touching—arises from their efforts to stay safe while longing for human connection.
—Mark Halliday

“I understand how near you are to the tipping. I understand how the sensation is of moving very quickly as if along a high scaffolding where the danger is in becoming too conscious of the easy, animal rhythms of walking. You’re trying not to over-think it and you’re trying not to not think of it either.”  Addressing us from “this precise moment in America” at which “the nation is a hallway all vanishing point no conclusion,” Bolina proves to be a virtuoso at ontological standup comedy—or is it elegy?—as his lyric riffs hit “the crease in [the] brain where the self accumulates.” These are poems that will retain their intensity unto many re-readings.
—Claire Bateman 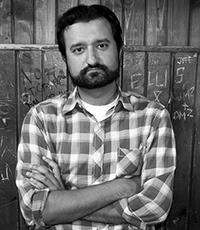 Jaswinder Bolina is an American writer. His first collection of essays Of Color will be published in June 2020 and is currently available for pre-order from McSweeney’s. His most recent collection of poetry The 44th of July was released by Omnidawn in April 2019. It’s been named a finalist for the 2019 Big Other Book Award and was long-listed for the 2019 PEN America Open Book Award. His previous collections include Phantom Camera (winner of the 2012 Green Rose Prize in Poetry from New Issues Press), Carrier Wave (winner of the 2006 Colorado Prize for Poetry from the Center for Literary Publishing at Colorado State University), and the digital chapbook The Tallest Building in America (Floating Wolf Quarterly 2014). An international edition of Phantom Camera is available from Hachette India. His poems have appeared in numerous literary journals and been included in The Best American Poetry series.

His essays can be found at The Poetry Foundation, McSweeney’s, Himal Southasian, The Writer, and other magazines. They have also appeared in anthologies including the 14th edition of The Norton Reader (W.W. Norton & Company 2016), Language: A Reader for Writers (Oxford University Press 2013), and Poets on Teaching (University of Iowa Press 2011).

He teaches on the faculty of the M.F.A. Program in Creative Writing at the University of Miami.