Standing in Line for the Beast by Jason Bredle 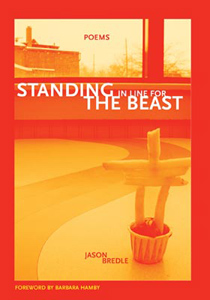 Standing in Line for the Beast

“These poems attack basic human desires, such as wanting to turn into a werewolf so you can tear the throat out of a crashing bore. Or picturing hell or characterizing death, which in a Jason Bredle poem can take you from listening to his friend Anne read a poem to a thunderstorm in Memphis to Mexico to ‘an 18 / wheeler hauling Little Debbie snack cakes up I-75’ and beyond. Jason Bredle is in that truck, eating Little Debbie cakes and being kicked in the ass by Kierkegaard, heading to Mexico to fall in love or die, because either one could be just around the corner.”
––Barbara Hamby, from the foreword

“Jason Bredle has swagger, smarts, and talent in abundance, not to mention impeccable comic timing. He is also confident enough in his command of tone and in his emotional range to never allow himself to settle for shtick and the easy tour-de-force. His poems always delight and surprise us, but their ultimate aim is pathos, even heartbreak. Standing in Line for the Beast is a collection of unusual promise.”
—David Wojahn

“Funny things happen to Jason Bredle while he’s Standing in Line for the Beast, waiting for the Apocalypse—not funny to him, perhaps, but deliciously funny to his readers. In poem after poem he makes us smile, chuckle, snort, chortle, but never loses sight of the tragedy that gives rise to his comedy. Reading Standing in Line for the Beast is like eating a rich, complex dessert, where hints of acidity and underlying bitterness make the sweetness rare and delightful.”
—Richard Cecil

“In Standing in Line for the Beast, all becomes event, even the image actively assembles contexts for decisions, directions, regrets, and compensation. There are no empty moments; each moment is the start of something that immediately gives birth to the next moment. The result is that Jason Bredle has decoded pulse. . . . Jason is clever enough to put everything into the perspective of how unstoppable the motion of existence is, in its raggedness, in its ability to seek comfort in the longing for what at any other moment might not sustain, but does right now, but does as every preceding moment feeds this incredible now.”
—Thylias Moss

“The poems in Jason Bredle’s first full-length collection, Standing in Line for the Beast, spill off the page like a whole closetful of Ray Kroc Youth Achievement Awards—a thousand individual moments so strangely and vividly crystallized you want to hold onto them forever.”
—DIAGRAM

” . . . while I was never quite sure where Bredle was taking me next, I somehow liked where I was going.”
—Jay Robinson, Barn Owl Review

” . . . Standing in Line for the Beast is a promising book, at times dazzlingly sharp and funny.”
—Jason B. Jones, Bookslut

“Objects are springboards for the poetic imagination and Bredle comes across as a bit stunned over what to do with his overwhelming accumulation of them, turning out piece after lengthy piece of list-laden free verse, cramming every nook and cranny with a cacophony of catch-alls. We, in turn, come away from these poems a bit stunned ourselves. Stunned by the breadth of his wit, by the boldness of his voice, and by the endless inner monologue of asides, false starts, circumlocutions, detours, digressions, pitfalls, and pratfalls that guide nearly every poem in the book.”
—Peter Matera, RATTLE’s e-reviews 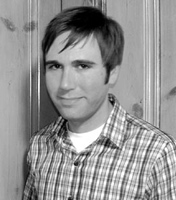 Jason Bredle received degrees in English and Spanish from Indiana University and an MFA from the University of Michigan. He is the author of Pain Fantasy (Red Morning Press); Standing in Line for the Beast, winner of the 2006 New Issues Poetry Prize; A Twelve Step Guide, winner of the 2004 New Michigan Press chapbook contest; and A Pocket-Sized Map of My Heart, a self-published collaboration with Leigh Stein. He lives in Chicago and works at a translation agency in Evanston, Illinois.