The Clubhouse Thief by James Janko 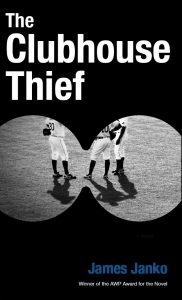 “What if the Cubs won the World Series? What would it mean to lose the curse of failure, and what anyway is the meaning of that curse? This is a romantic fiction of American baseball driven by superstition and enduring loyalty and set against the backdrop of Chicago, its history the converging American center of racial and political turmoil. The other wished for fictions are the presidential candidacy of an African American Muslim woman, supported by the Cub team members, and the infusion of poetry into the games of baseball and politics. The passionate desire of the game is threaded through an equal desire for racial equality and social justice and the history of athletes with political convictions. Narrated by a sardonic aging bench coach, still grasping for a last chance and revitalization and beset by contemporary changes of race and gender to his iconic (white) American game, this romantic comedy is crafted with careful tension, all the gripping pacing and rhythms in play. Rummaging through and lifting the love letters, poetry, and opinion articles of his team, the bench coach/clubhouse thief gets an education and an epiphany. Not an avid fan nor very knowledgeable about baseball, I followed every pitch, hit, and steal with the same intensity of the telling, and I realize that I, too, really wanted the Cubs to win. Hilarious and heartbreaking.”

“Jimmy Janko’s The Clubhouse Thief is a baseball book the way Bernard Malamud’s The Natural is a baseball book. Set in that great American city, Chicago, here is an American story that’s at once morality play and entertainment. More than a genre book, yet The Clubhouse Thief mines our fascination with the inner workings of a profession and discipline. How does a baseball player think? Here is a deep exploration of America, and how we create ourselves and our conscience and our country.”

“The historic problem with sports fiction is that the fictional, internal dramas on display can’t compare with what we read in the best of sports biography. But with James Janko’s The Clubhouse Thief, we have sports fiction that rises to the level of art. Its intersection with sport is mere setting for the issues it explores. An absolute triumph.” 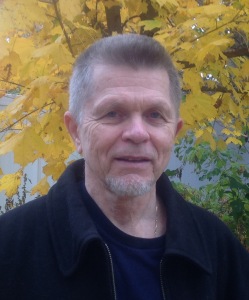 James Janko refused to carry a weapon while serving in Viet Nam as a medic in an infantry battalion commanded by Colonel George Armstrong Custer III. His medals include the Bronze Star for Valor, which he returned to the U.S. government in 1986 to protest their military involvement in Central America. In 2008, Janko gave away other medals to Vietnamese victims of Agent Orange: Mrs. Dang Hong Nhut, who suffers from thyroid cancer and has had numerous miscarriages, and Ms. Tran Thi Hoan, who was born without legs due to her mother’s exposure to the chemical.

Janko’s short stories have appeared in The Massachusetts Review, The Sun, and many other magazines. He won a 2002 Illinois Arts Council Award for Fiction, and his earlier novel, Buffalo Boy and Geronimo, received wide critical acclaim and won the Association of Asian American Studies 2006 Prose Award and the 2007 Northern California Book Award for Fiction. He lives in La Salle, Illinois. http://www.jamesjanko.com/