The Headless Saints by Myronn Hardy 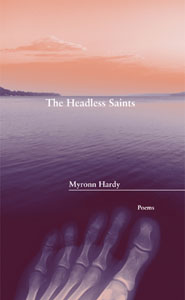 “These spare, clear-eyed verses are remarkable for the ease with which they reveal a poet of ambitious intelligence and wellhoned craft. Myronn Hardy has written a collection of quietly combustible poems that remind us of just what a gifted poet’s deftly judicious craft can produce in music and emotion.”
—Kwame Dawes

“Myronn Hardy’s The Headless Saints is a book comprised of lyrical epiphanies that embrace the everyday and the mythical, and there is no way to escape the full thrust of these marvelous poems. The tropical feel in The Headless Saints, in the pace and space of the crafted imagery, is tangible and believable.”
—Yusef Komunyakaa

“‘To stare is to see nothing. / It’s in quiet observation where all becomes visible.’ These lines sum up the vigilant spirit of Myronn Hardy’s agile second book, The Headless Saints, which offers an apt vision of the black Diaspora in cogent, kaleidoscopic shards. With a meticulous eye, he sees ‘white chickens thin as vertebrae’ or contemplates the inedible ‘blood porridge’ of a violent, bigoted world. Hardy’s cosmopolitan poems can seem as delicate as a trellised vine or as strong as ironwork: he’s a quietly artful, wonderfully clear-sighted poet.”
—Cyrus Cassells

“This is a sneaky collection in that it wrecks you incrementally, in small doses. You’ll feel only a vague throbbing until the pain takes you. Despite the assonance, the poems themselves sound quiet, but when added together, Hardy creates a web of sound we can’t ignore; he venerates a host of ghosts that will haunt us long after we’ve put the collection down.”
—Casey Thayer, RATTLE e-review

” . . . poetry that memorializes those who survived human cruelty throughout history. Some poems are directly from the perspective of those who survived losing loved ones to invasion and colonization; others address the creation of the first ghetto, or the aftermath of other atrocities committed against people of color. A haunting yet exceptional testimony against the evils of genocide in all its forms.”
—Midwest Book Review

” . . . it is this regular recurrence of outstanding poems which keeps us following Hardy across a spectrum of tones (surreal, hermetic-imagism, historio-political) and places as various as Italy, Brazil and Arkansas. What emerges from all this movement is a sort of twin map—the lushness of a multitude present places set against the enduring, diffuse havoc caused by Imperialist forces throughout the history of these places—each map always in the middle of over lapping the other. . . . an ambitious project . . .”
—Joe Hall, Phoebe

“There is image, story, reality, the eery, the surreal, and unexpected takes in this work. It has the magic and travel, but the lines are still sparse and surprising. Very nice.”
—Jim Knowles, Oranges & Sardines, Vol. 1, Issue 1

Myronn Hardy is the author of two volumes of poetry, Approaching the Center, which won the PEN/Oakland Josephine Miles Award, and The Headless Saints(2008), winner of the 2009 Hurston/Wright Legacy Award from the The Zora Neale Hurston/Richard Wright Foundation. His poems have appeared in Ploughshares, The Virginia Quarterly Review, Indiana Review, Tampa Review, Phoebe, Versal (Amsterdam), Third Coast, and elsewhere.  His short stories have appeared in Gulf Coast, Callaloo, and Gargoyle. He has received fellowships from the Annenberg Foundation, Djerassi, Cave Canem, Instituto Sacatar, and Fundación Valparaiso. He has received degrees from the University of Michigan and Columbia University. He is currently completing his first novel. He lives in New York City. www.myronnhardy.com