The Hourglass Heart by Gail Martin 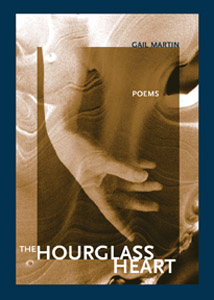 “Here’s a book that will draw us all in. We may be taken, first, with the fresh invention of the God poems, those lucid yet subtle miniatures unlike anything we’ve seen before. Or the ‘Woman of Pearl’ and ‘Woman of Paper’ that explore what a woman may be, but obliquely, suggestively. Then we begin to feel a pervasive sadness under the rich images. At first it’s the everyday sadness of ‘Lemons’ or the quirky sadness of ‘Why Counting Sheep Doesn’t Work for Mothers.’ Before long, we’re drawn into more explicit grief, and the poet’s sorrow is allowed to resonate beneath the metaphors of Double Dutch or ghosts or a carved totem pole. Restraint and skill merge with genuine anguish to create poems that are sure to hold and move us.”
—Conrad Hilberry

“An intelligent, generous spirit roams these poems, embracing the world in all its grief, intransigence, and glory. Whatever her subject—nature, family, or science—Gail Martin uncovers subtleties and new wonders, rewarding us with her insights and charming us with her brave, clear voice. What a marvelous book!”
—Barbara Ras, author of Bite Every Sorrow

“If the landscape of Gail Martin’s poems is a domestic one, then it is Emily Dickinson’s wild domesticity, where innocuous-looking teapots contain tempests, where lemons stacked in a white bowl imply grief. If these are the poems of a mother, of a wife—which they are—then they make the claim that motherdom, wifedom, is the kingdom of God.”
—Diane Seuss

“Martin’s poems sing in various pitches as well: pitches of anger and love, family and solitude. Her combinaton of traditional forms and lyricl subject matter makes this collection a uniue combination of disipline and evanescence.”
—Cindy Clem, Shenandoah, Winter 2004

Gail Martin, a Michigan native, grew up in Flint. She earned a B.A. from Kalamazoo College and completed her Master’s degree in clinical social work. Her work has appeared in numerous literary magazines, including Rattle, Primavera, Poetry Northwest andFolio. Martin was selected by Alice Fulton as the 1999 Winner of the National Poet Hunt sponsored byThe MacGuffin. She lives with her husband and three left-handed daughters in Kalamazoo, Michigan.