The Nature of Remains 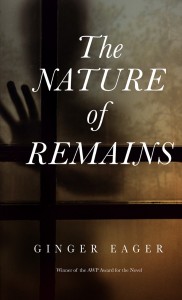 The Nature of Remains

Winner of the AWP Award for the Novel

“With the wrenching simplicity of Kent Haruf and the dark southern lyricism of Daniel Woodrell, Ginger Eager has generated a story that’s tragic and restrained, piercing, compassionate, and incredibly wise in the ways of human nature. Like the amethysts that make up the book’s thematic core, the characters are shaped by powerful forces from within and without. They fracture and yield. They cleave blindly to the very patterns that will destroy them.”

—Paula McLain, author of The Paris Wife and Love & Ruin

“The Nature of Remains is the excellent first novel by Georgia native Ginger Eager. Its characters rang true to me in a way that’s far too rare, full of telling details and never predictable. I literally didn’t want to put it down.”

“Ginger Eager’s evocative debut sings with the true cadence of the South. Her writing is sure and graceful, her characters both fully-formed and flawed. Doreen Swilley is a feminist everyman, and her struggles to find justice and softness in the hardscrabble world Eager renders so truthfully broke my heart in all the best ways. THE NATURE OF REMAINS is a story that will linger in your mind and heart, told beautifully by a writer of rare talent. Don’t miss it.”

—Joshilyn Jackson, NYT and USA Today bestselling author of The Almost Sisters and The Opposite of Everyone

“Ginger Eager is a fresh, unflinching voice in Southern literature. The Nature of Remains isn’t afraid to explore the complexities of domestic violence or poverty—or what women end up sacrificing as they try to avoid both. Doreen Swilley earns our compassion as the novel moves fiercely on, juxtaposing the past with the present, good intentions with bad decisions, and the struggle to love with the struggle to live. This is a book that will keep you in its spell even as it breaks your heart.”

—Anna Schachner, author of You and I and Someone Else

Ginger Eager grew up in Snellville, Georgia in a hardworking family that valued kith and kin. Ginger’s reviews, essays, and short stories have appeared in The Chattahoochee Review, Bellevue Literary Review, The Georgia Review, West Branch and elsewhere. She lives in Decatur, Georgia, with her husband and their college- aged son.

A portion of the proceeds of The Nature of Remains will be
donated to Circle of Love, a shelter for victims of domestic abuse in Greensboro, Georgia.