The Prayers of Others by David Keplinger

The Prayers of Others

“Each poem in David Keplinger’s The Prayers of Others is a world unto itself—and the whole of them crated for shipment to the wilds of the imagination, with stickers from Central Europe, where this poet once lived. There are treasures of mystical lucidity too, nestled with the rest, and upon opening these, one feels blessed, and in the presence of a poet who has entered the house of Max Jacob. What a wonderful gift to us all.”
—Carolyn Forché

“Imagine The Inferno reconfigured as a cross between one of Joseph Cornell’s boxes and a Rube Goldberg drawing: an infernal machine designed to produce the uncomfortable pleasures of wit’s disjunctions, gallows humor, wry nostalgias . . . That’s the landscape and tone of Keplinger’s collection of very short prose poems. ”
—Jordan Smith, The Antioch Review, Spring 2007

“At their best, poems like this one in The Prayers of Others achieve a clarity akin to that of photographs take on high contrast film. Keplinger’s exacting attention to detail prospers in the prose poem, benefiting from the self-contained quality of the form.”
—Sarah J. Gardner, American Book Review, Nov-Dec 2007 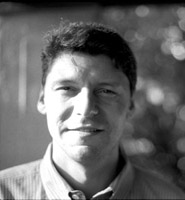 David Keplinger is the author ofThe Rose Inside, which won the 1999 T.S. Eliot prize, The Clearing(New Issues), and The Prayers of Others (New Issues). His essays, translations, and poems have appeared in Poetry, Prairie Schooner, Ploughshares, Gettysburg Review, AGNI, Virginia Quarterly Review, Mid-American Review, The American Voice, and many other journals. He has received grants and awards from the National Endowment for the Arts, the Academy of American Poets, the Pennsylvania Council on the Arts, and the Katey Lehman Foundation. Keplinger teaches at American University in Washington, D.C.