The Salt Palace by Darren DeFrain 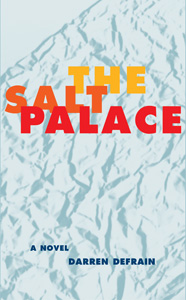 “If you think we don’t need another heavily footnoted Mormon road trip basketball novel, think again. With this unorthodox gem, Darren DeFrain creates a genre of his own, with the athletic ease of the Angel Moroni going in for a lay-up. Thoughtful, deadpan, shot through with comic inspiration, it’s a debut worth doing the wave for.”
—J. Robert Lennon, author of Mailman

“The Salt Palace is a novel that zigzags across America, across our religion-soaked history too: our national obsession with shorter, faster routes to redemption. Its protagonist, Brian, leaves his claustrophobic life in Michigan to revisit his childhood home and faith. He wants to live in it, and outside it too, sampling all the generous, heady, forbidden sensations. He makes this trip with a one-armed, splinter-sect prophet who might be a lunatic. It’s never clear. Neither is the right path. Yet Brian, and therefore the reader, is granted a fleeting glimpse of a grace-filled, ecumenical afterlife the most cynical of us would be glad to inhabit. I loved this novel, its risks and realities.”
—Debra Monroe, author of The Source of Trouble

“Above the footnotes (which serve as a kind of guide to Mormonia and the Utah Jazz) in this fine first novel, Darren DeFrain serves up the trials of Brian, another young American caught between his religion and the hard places of youth. This bittersweet homecoming, about a part of the world I know well, is both tough and tender, and certainly convincing. This novel is an engaging debut by a writer to watch.”
—Ron Carlson, author of A Kind of Flying: Selected Stories

“With the publication of The Salt Palace, we welcome a brave new voice to American fiction. Darren DeFrain is one hell of a writer. The marvel of this gritty and propulsive first novel is that DeFrain, right out of the gates, has staked claim on a wild new territory of desperate love, alienation, heartbreak, and redemption. A stranger in his own land, our hero Brian is driving across America to find himself or to lose himself, he’s not sure which. He’s got a passenger with him—Randy, a one-armed Mormon Lone Ranger, a character as memorable as any I’ve met in contemporary fiction, and there’s room for one more. So hop on in, but strap on your seatbelt and hold on to your hat. The road’s a little bumpy up ahead.”
—John Dufresne, author of Deep in the Shade of Paradise

“The Salt Palace, Darren DeFrain’s first novel, is a unique mixture of genres—a road trip and religious novel with enough suspense to keep the reader on edge. But at heart it’s a coming-of-age novel . . . The novel’s ending is startling and ambiguous, unfinished (like the playoffs), uncertain, much like Brian’s life. The story reverberates and unsettles, long after reading.”
—Gordon Houser, The Wichita Eagle, Sunday, Oct. 23, 2005

Darren DeFrain is the author of numerous short stories, essays, and screenplays. He is a graduate of the University of Utah, Kansas State University, Texas State University’s M.F.A. program, and Western Michigan University, where he received his Ph.D. in creative writing in 2000. He now lives in Wichita, Kansas with his wife, Melinda, and two daughters, and he is the Director of the Writing Program at Wichita State University.