The World Cut Out with Crooked Scissors by Carsten René Nielsen 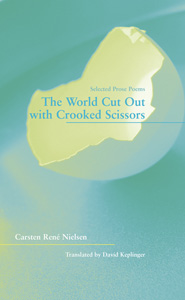 The World Cut Out with Crooked Scissors:
Selected Prose Poems

“Carsten René Nielsen has reinvented the prose poem as a revelation in a paragraph. His world, skillfully Englished by translator David Keplinger, is full of surprising creatures and equally surprising emotions. Nielsen is a master who deserves to be better known outside his native Denmark.”
—Zack Rogow, Editor and Artistic Director, Two Lines: World Writing in Translation

From the translator’s note:

Born in 1966, Nielsen works as a full time writer in Aarhus, the second largest Danish city, an academic and cultural center located on the peninsula of Jutland. Aarhus is also the home of the Grauballe Man, a bog man 2000 years old and displayed year round at Moesgaard Museum in a wooded area south of the city. This man, his cut open throat, his fractured shin, his beard stubble, his skin—even his fingerprints—preserved by the tannins of the bog, though flattened by its tremendous weight, lies displayed under glass, a ghastly testament to our common tribal past. I find in Nielsen’s poems a similar spectacle—the little glass box of form, and, within, something old, nasty, fascinating, human.

“Danish poet Carsten René Nielsen confines his poems to one tight paragraph, a highly constructed and mesmerizing window onto the world.”
—The Bloomsbury Review, March/April 2008

Carsten René Nielsen is the author of eight books of poetry, most recently Forty-One Animals(2005), which won him critical acclaim throughout his native Denmark. Recent collections include Circles (1998) andClairobscur (2001). His first book,Mechanic Loves Machinist, was published in 1989, and was awarded the Michael Strunge Prize for Literature. He has won several fellowships from the Danish Council on the Arts. His poetry has been featured in magazines in Italy, Germany, Canada and the United States. Nielsen lives in Aarhus. www.carstenrenenielsen.dk

David Keplinger’s third poetry book, The Prayers of Others, was published in 2006. He has been awarded the T.S. Eliot Prize, as well as fellowships from the National Endowment for the Arts, the Pennsylvania Council on the Arts, and the Katey Lehman Foundation. His poems appear inPloughshares, AGNI, Poetry, The Iowa Review, The Gettysburg Review and many other journals. Keplinger teaches at American University in Washington, D.C.