To Zenzi by Robert L. Shuster 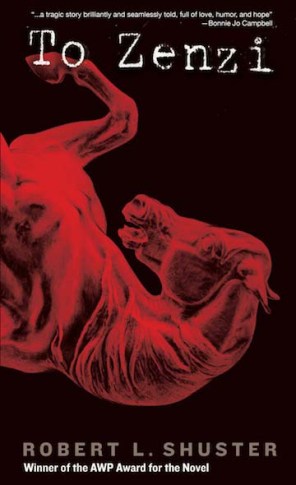 Winner of the AWP Award for the Novel

“Thirteen-year-old Tobias Koertig joins the German youth army in the final months of World War II, quickly earning the Iron Cross for battlefield valor. But his luck may run out as his jealous archnemesis seeks payback.

In 1945, amid seemingly endless bombings from the British and Russians, Tobias is driven by hunger to enlist. He leaves behind Zenzi Fuchs, a girl whose Jewish blood marks her for danger. Although Zenzi warns Tobias that the Nazis have been killing the Jews, Tobias is naïvely convinced that the Germans would never do such a thing and will instead develop superweapons to defeat the Russians. A talented artist and daydreamer, Tobias imagines a world of the future in which time machines, glass architecture, pneumatic tubes, and space travel abound. Once recruited, Tobias makes a fast friend in Albrecht Stalla, a mischievous boy who introduces Tobias to the arts of insubordination. Tobias also meets Werner Fenzel, his squad leader, who takes a dislike to Tobias, which inspires him to send Tobias and Stalla on dangerous maneuvers. But those maneuvers lead to an accident for which Tobias receives the Iron Cross, an award Fenzel believes he himself deserves. Tobias’ alleged courage as well as his artistic skills catch Hitler’s interest, and soon Tobias has a new job sketching the fallen city, a job that enables him to reunite with Zenzi and plan an escape. Set against the historic fall of Berlin, this debut novel vibrates with emotion. Shuster deftly captures the shaky terrain of adolescence. Tobias’ early experiences of grief and love are cut short by the urgency of falling bombs. And in the face of risky missions and confusing commands, he is not simply afraid, but bewildered by the unstable, unheroic leadership around him. His adventures spiral into a new life in America, but his past haunts him still.

A sweeping portrait of survival in spite of devastating loss.”

“This miraculous coming-of-age novel is set against a backdrop of death and destruction as Berlin falls to the allied forces in 1945, but it manages to be more adventure than war story. Part Billy Pilgrim, part Huckleberry Finn, part Candide, our picaresque protagonist is a thirteen year old boy, orphaned and drafted into the disintegrating German army, stoutly enduring the insults of his position, finding a way to survive (at times even thrive) by negotiating the rubble and human ruins of Hitler’s crumbling empire. To Zenzi is a tragic story brilliantly and seamlessly told, full of love, humor, and hope.”

—Bonnie Jo Campbell, AWP Award Judge,  author of Once Upon a River

“To Zenzi is a stunningly original and compelling novel of war-torn Berlin. Shuster creates a memorable cast of characters who struggle to navigate the horror and absurdity of war. An outstanding achievement.”

“Like some of our very best novels, Robert Shuster’s To Zenzi brings off a magnificent contradiction: it wrings comedy out of calamity. The setting is Nazi Berlin in its final throes, a shrinking hellscape defended by a reptilian junta, the dead strewn everywhere and the living either delusional or grim—a horror show vividly rendered—and yet out of this Shuster salvages tender stories of both first love and coming of age. I found myself carried along irresistibly by wild reversals and surprising compassion, all of it alive with wonder. I came away knowing I’d met a master.”

—John Domini, author of The Color Inside a Melon

Robert L. Shuster’s short fiction has appeared in North American Review, Witness, The Mississippi Review, Stone Canoe, and War, Literature, & the Arts (among other publications), and in Micro Fiction (W.W. Norton) and Yellow Silk II (Warner Books). For a number of years, he wrote arts and culture pieces for The Village Voice. Raised in upstate New York and Massachusetts, and a graduate of M.I.T., he lives in Westchester County, NY.