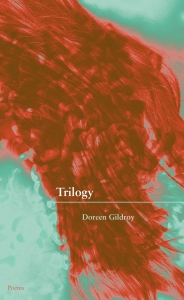 “The so-called wall between two worlds is erased in Doreen Gildroy’s Trilogy. The tone is original and based on reverence and awe. The reader feels the mind of the speaker hard at work trying to say the unsayable. This is scary in the best sense because the so-called spiritual becomes the actual spiritual because of the writing—the delicacy of touch like much of Debussy—profound carved bewildered—a convincing rare vision delivered by a voice otherworldly but clear in a tone that captures something like unconscious prayer, unforced prayer, unorthodox prayer. The pauses and breaks are necessary to the entire effect of authentic reverence, authentic seeking. To make this kind of thing a contemporary work is a terrific achievement. It lays down a truthful visionary songtalk, addressed to the Other. Auden says ‘a real book reads you’ and Trilogy did that to me. It completely drew me into its strange grief and wonder.”

Doreen Gildroy’s first two books were published by the University of Chicago Press: The Little Field of Self in 2002 (winner of the John C. Zacharis First Book Award from Ploughshares) and Human Love in 2005. Since then, she has been working on Trilogy, which consists of three separate interrelated books. She has been Visiting Writer at the Vermont Studio Center, a Robert Frost Fellow at the Bread Loaf Writers’ Conference, and the Visiting Poet for the MFA Program in Writing at the University of California, Irvine. Her poems have appeared in many anthologies and magazines, including Ploughshares, Slate, TriQuarterly, The Virginia Quarterly Review, and The American Poetry Review (which published the third book of Trilogy as a special supplement). She currently writes a column for APR on Poetry and Mysticism.